Bourne lifted themselves out of the relegation battle with a hard-fought victory on Saturday.

Having been promoted last season, they had a tough start to this campaign with several notable absences forcing coach Dave Maudsley to change his starting line-up on a weekly basis and hindering any possibility of real momentum.

But the club's seventh league win since Christmas shows just how good a side they are given the opportunity.

Having secured their place in Midlands Three East (South) again next year, the win was just reward for a group of players that have worked hard to achieve their ambition.

Bourne had scraped a one-point win against Rushden & Higham when the two sides met at Milking Nook Drove but they travelled for the return fixture with a stronger side who have enjoyed some good wins in recent weeks.

It was clear though that Rushden - also desperate to avoid relegation - were intent on putting up a fight.

Buoyed on by a hostile crowd, the home side were hugely physical in the opening exchanges and quickly put pressure on their visitors.

Bourne, perhaps weighed down by the prospect of relegation, looked out of sorts but what they lacked in cohesion they made up for in spirit.

Some dogged defending kept the hosts from scoring despite several surges from inside the Bourne 22.

Rushden dominated the opening 20 minutes - benefitting from playing down a significant slope - but Bourne's defence was solid.

The game was at stalemate until an error at the breakdown provided an opportunity for Rushden to kick a penalty.

Bourne grew into the game in the second quarter and they worked their way up the slope into the Rushden half.

Despite having the greater share of territory and possession, Bourne were unable to convert pressure into points as too often their progress came to an abrupt end with sloppy errors.

Rushden began to tire towards half-time but Bourne still couldn't execute and it was eventually the boot of scrum-half Sam Evison that got the guests on the scoreboard.

Rushden's ill-discipline at the breakdown was beginning to cost them and at the first opportunity within range Evison, against a difficult wind, guided the ball between the posts.

The game was very much in the balance for the final 10 minutes of the first half and with both sides giving their all, it was fitting that half-time came with the two teams level at 3-3.

Bourne started the brighter of the sides in the second half, making the most of their chance to play down the slope.

The visitors looked the better of the sides in open play and seemed able to create opportunities at will but too often their advances fell apart in the final stages.

The Bourne pack was significantly better at the scrum and it was from a set-piece in the Rushden 22 that they finally got reward for their endeavours.

Captain Tom Dixon initially picked up from the base of the scrum and Bourne organised a series of rucks moving closer to the Rushden try line each time.

After making their way towards the centre of the pitch, prop Chris Greenwood spotted a gap and barged through before grounding down under the posts. Evison added the extras and Bourne had a seven-point cushion.

And a short while later Evison extended Bourne's lead when he sent over another penalty.

At this point Bourne looked to be firmly in control but the side had to be rearranged when fly-half Maudsley was injured midway through the half.

Replacement JD Charlton slotted into the centres so that Adam McHugh could move to full-back, allowing Jack Berry to step in for Maudsley.

Rushden clearly had no intention of giving up easily and they did what they could to close the gap.

Thriving on Bourne's mistakes, Rushden were quick to try to turn any possession into pressure and it was only the resolute defence of Bourne that stopped a number of potential tries.

Wing Josh Lynch led the way with a number of impressive hits in the wide channels and back-rowers Adam Binns and Sion Williams put in good displays with their work around the breakdown.

Eventually Rushden did get more points but only in the form of a penalty.

At 13-6 up Bourne were well aware that one mistake could cost them dearly but they still couldn't improve their effectiveness as time and time again they created opportunities but weren't clinical enough to execute.

Thankfully, the pressure they imposed on the home side was telling and Bourne found themselves with a number of penalties.

The reliable Evison added two further penalties but these were matched by Rushden and with 15 minutes to go Bourne were still just a converted try ahead at 19-12.

Once again it was Evison who extended Bourne's lead.

With his side having won a penalty on the halfway line, Evison stepped up for a long-range effort with an increasingly difficult wind blowing across the pitch.

Deliberately sending the ball wide initially, Evison had clearly judged his kick to perfection as it curved and sailed between the uprights.

With so much riding on the game, the final 10 minutes were always going to be tense and - although benefitting from a 10-point margin - Bourne were once again under pressure from the restart.

Matters were made significantly worse when Lynch found himself in trouble for a late tackle.

Although Lynch appeared to have been committed to the tackle with little chance to pull out, the referee seemed swayed by the home crowd angrily calling for a red card.

It meant little to the outcome that he compromised and issued Lynch with a yellow card dismissing him for the remainder of the game.

Some frantic defence by Bourne in the final stages, notably by Dixon and second row Andrew Brown, kept Rushden out on a number of occasions and the 14 menthrew themselves about as if their lives depended on the result.

With two minutes left on the clock, Bourne fed the final scrum knowing that they simply had to hold onto the ball until time was up.

Once Berry had confirmation from the referee that time was up, he took a final pass from Evison before sending the ball well into touch.

Bourne were understandably pleased to have ground out a win in difficult circumstances and their elation at surviving relegation was clear as they regrouped after the game.

Prop Paul Mambey said: "It's massive for the club.

"We've had a tough year but we've worked hard and we've always believed we had it in us to compete at this level.

"We have a small squad but it's dedicated and the work we've put in at training has paid off."

Maudsley added: "This is a side that has ridden some pretty miserable lows and the character they've shown in knuckling down and coming out the other side of them has been fantastic.

"This game wasn't pretty but it was all the more significant for the way in which we responded to a very difficult situation - the discipline we showed and the manner in which we conducted ourselves says far more about us than the result.

"We know we can play a good brand of rugby but it was clear that we can also dig out a win when things are against us".

Bourne host St Neots in the final league game of the season.

St Neots also came up from Midlands Four last season and Bourne started this season with an away win in the opening fixture.

However, St Neots have enjoyed a recent resurgence and both sides will fancy their chances.

A win for Bourne could see them jump as high as sixth in the league standings - failing that they would be guaranteed ninth place.

Bourne have won 10 league games this year - more than any team outside the top four sides. 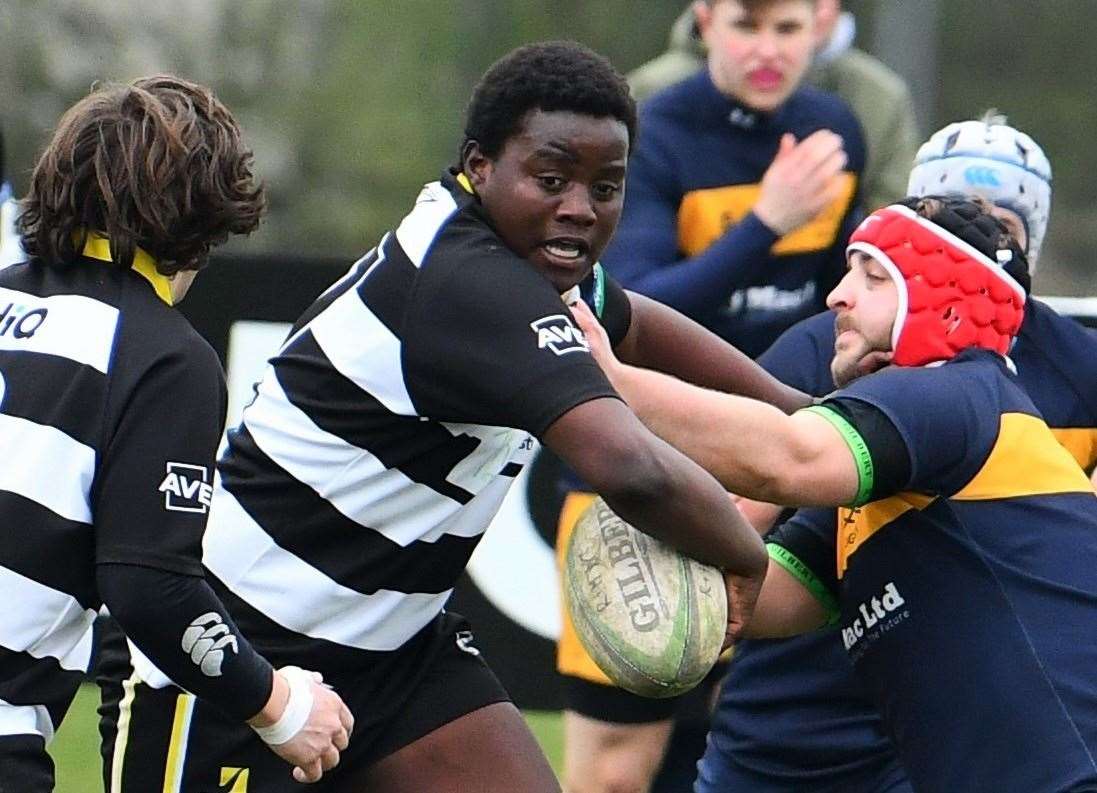