Geoff Capes has been officially inducted into England Athletics’ hall of fame.

The Holbeach legend collected a special award during a ceremony at the Ricoh Arena, Coventry, on Saturday night.

He was inducted by the coach who spotted his potential when he was just a schoolboy, Stuart Storey.

Capes said: “I have been happy to compete at the very highest level, to have been number one in the world and to have made many friends."

He paid tribute to the work of the Ron Pickering Memorial Fund and the young athletes coming through, adding: “We have some great athletes and it is super to watch and see them win medals.”

In inducting him, Storey paid tribute to shot putting legend: “He’s been a great man in every respect. He was, and remains, a celebrity in this country. Geoff was superb in his career.” 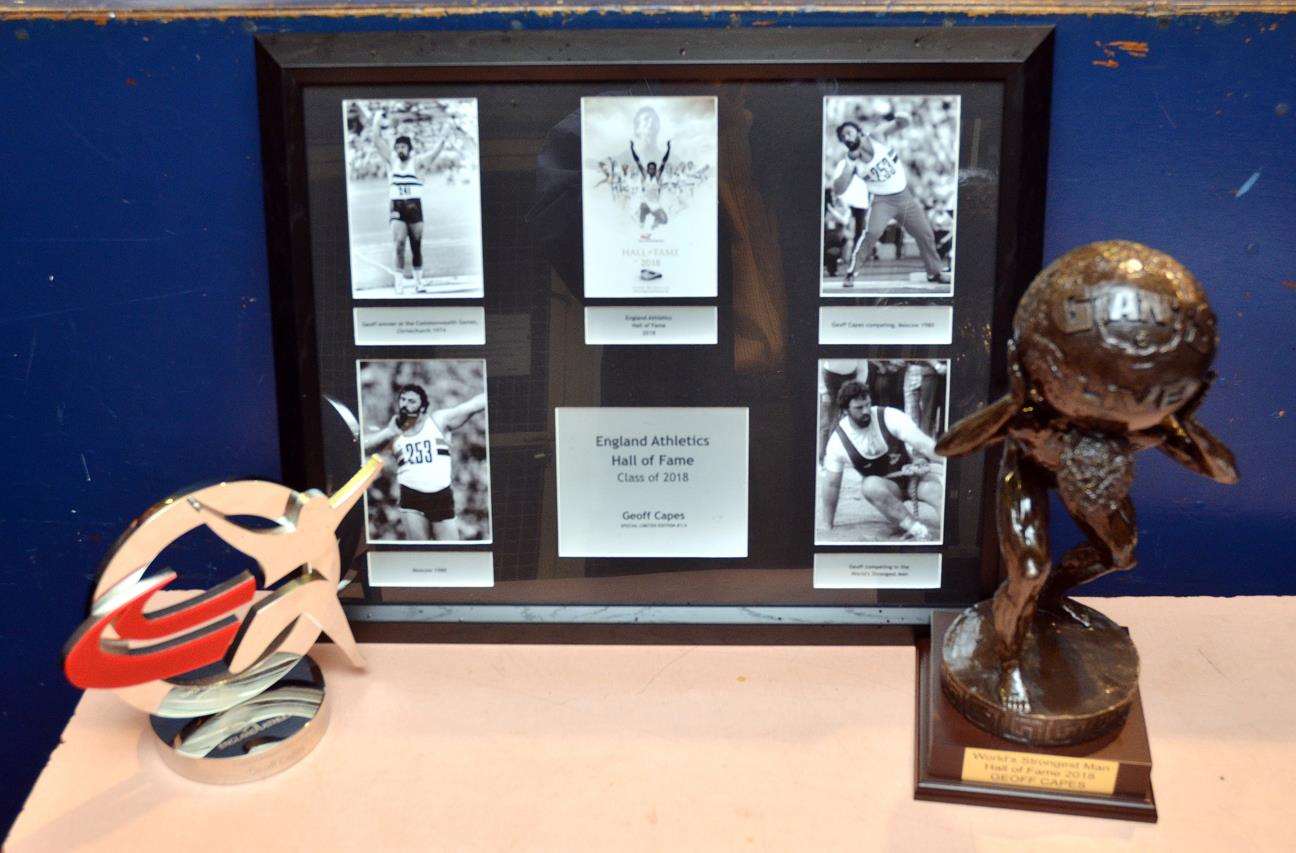 In May 1966 Athletics Weekly featured two promising 16-year-old throwers. One was Hungarian-born Joe Bugner, a former English Schools junior discus champion who would turn professional boxer the following year and go on to fight Muhammad Ali and Joe Frazier. The other was Geoff Capes, already almost 6ft 6in tall and weighing over 16 stones. Believe it or not, he was the smallest of five brothers and in his early days as an athlete ran a 4:48 mile and raced cross country!

The turning point in Capes’ life was when he came under the coaching influence of international high hurdler Stuart Storey who had recognised his shot putting potential. Capes began setting age records from 16 onwards and in 1969, at 19, made his debut for the national senior team. Police Constable Capes placed fourth in the 1970 Commonwealth Games but his breakthrough year was 1971 when he went tantalisingly close to the UK record held by his hero, Arthur Rowe. In 1972 he smashed that record with a distance of 20.18.

It was in 1974 that he became one of the world’s elite. At the Commonwealth Games in Christchurch he ensured the gold medal with his opening effort of 20.74, and a fulfilling winter season continued apace as he set a European indoor record of 20.95 for victory in the European Indoor Championships. Outdoors, in June, he raised the Commonwealth record to the landmark figure of 21.00. Another milestone followed in August when he became only the sixth man in the world to reach 70 feet with a put of 21.37. It was all going so well, but at the European Championships in Rome – with everyone throwing far below their best – he had to settle for bronze.

The 1975 season was one of consolidation, although he was world ranked number one. He picked up a silver in the European Indoors and won at the European Cup Final, his best for the season being 20.80. His advance resumed in 1976. Indoors, he set a European record of 20.98 and regained the European title. Outdoors, he boosted his Commonwealth record to 21.55 but disappointment awaited him at the Montreal Olympics. He had the third longest throw in the qualifying competition but in the final he could muster only 20.36 for sixth place as the title went unexpectedly to the GDR’s Udo Beyer at 21.05. His despair at missing the opportunity of a lifetime was intense.

It would be another four years before he would improve his best mark again. In the meantime, though, he collected more medals, including a second gold at the 1978 Commonwealth Games. In May 1980 he came up with his longest ever throw: a Commonwealth record of 21.68 which survived as the British record for 23 years. He went into the Moscow Olympics ranked second but a back injury ruined his chances and he placed fifth. His athletics career may have ended in frustration but Capes went on to become even better known to the general public by twice winning the televised World’s Strongest Man title as well as being one of the country’s foremost budgerigar breeders.